Tea Room Closed for Renovations
We are not accepting reservations until further notice. 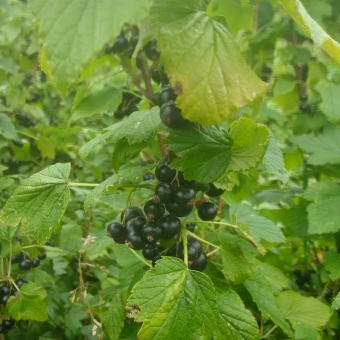 It's currant season at the farm...and this is one berry we've come to love.

The plants do very well in our soil. They produce some 8-10 lbs of berries per season and they have been consistent (even during last year's drought). We've not had to apply any pesticides, herbicides or any chemical fertilizer to have them healthily mature.

A good portion of our plants were purchased from a propagator in BC, while others were small plants we found on the farm (after cutting them down with our BushHog).

We not only like them because they are reliable and hardy producers, but we simply love their berries.

We use them for jams/jellies, syrups, and we also produce the occasional scones. We've also made our own liquors and this year, we certainly have enough to try our own wine.

Of course, the currants we are referring to here are black. However, we did also plant some red ones. These have not done so well, and we know very well why.

Our Red Currants were planted before a major modification to the house involving our septic bed. We had planted on the only piece of land that would suit our new septic bed. The result is we had to move the poor things the same year they were planted and in the middle of summer. They never really had a chance to take in that first year.

The second year (last year) made things even worse. They were subjected to a long period of drought and we had no irrigation. Surprisingly, they're still alive! They are however still 3 years behind their black counterparts.

There is however one (which we also found on the farm) that we mistakenly placed amidst some Black Currants. Smaller, it is almost overwhelmed by its black cousin, but its is also producing. This gives us a lot of hope for the surviving rows of reds.

Finally, one of the other plants that has thrived on our soil is Lavender. And again this year, it's been very productive.

Every time we plant the little shoots we have often wondered how they will progress. The most recent, we planted in the back of our house on a steep ridge. I can say that within a year, we were quickly overwhelmed at how large these beautiful bushes can become in such a short period of time.

In less than 2 years, we're now able to harvest the blooms.

We have many reasons to grow these plants. Part of it is for culinary uses. You will find this in our Tea Room where we tend to regularly make a Lavender pound cake and Lemon-Lavender short breads. We also make own Lavender syrup which is used to sweeten our iced teas.

However, we have so much of it, we will often dry small bouquets for sale at the shop. Lavender oil and its extremely pleasant scent has many beneficial properties.

For us it is also the ideal plant to attract pollinators. When in bloom, the bushes buzz loudly from the many bees these little flowers attract.

Looking For a Place to Host Your Next Event? Interested in Our Catering Services?